EA Sports have finally released the player ratings in FIFA 21 for Wolverhampton Wanderers. Wolves, by most standards, had a largely successful campaign in the 2019/20 season – finishing 7th and reaching a Europa Leauge Quarter Final. Many would have had Wolves down as potentially suffering from the dreaded second season syndrome but Wolves battled away, despite having a congested fixture list and the player ratings for Wolves in FIFA 21 do reflect a side that is on the up.

Most of Wolves’ squad have received upgrades on their FIFA 20 rating or have stayed the same which usually signifies that the team is improving and was deemed as underrated in the previous version. Thanks to the guys at FUT Bin, we’re able to reveal the full Wolves’ squad rating for FIFA 21 in order of best rated to worst rated. 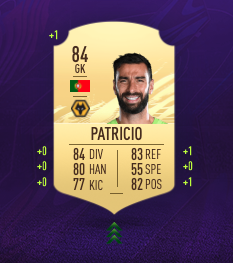 Rui Patrico’s FIFA rating has been improved by +1 and his reflexes and positioning have also increased by +1, seeing his overall rating rise to 84. 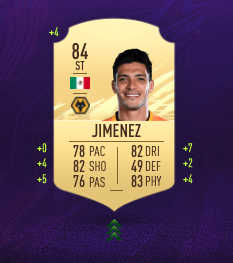 Raul Jimenez has received a +4 upgrade on his previous rating in FIFA 21 and rightly so. The Mexican was prolific for Wolves last season and his all-round game was impeccable. This has been reflected in his upgrade as his dribbling has seen a 7+ increase, his passing 5+, shooting +4 and physical +4 – however, we still think the pace is still a little harsh. 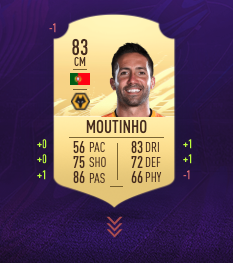 Joao Moutinho’s FIFA 21 rating has gone down -1 and rightly so. The magic Portuguese midfielder struggled for form throughout most of the season and although his defending, dribbling and passing has improved +1, his overall game has started to digress. 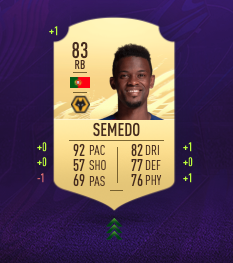 New boy Nelson Semedo’s FIFA rating has increased by  +1 and he’s sure to be a popular choice in Ultimate Team for his electric pace. His green link with Adama Traore on the right-hand side will cause anybody trouble. 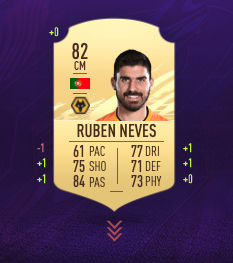 Ruben Neves’ overall FIFA rating hasn’t changed but we feel EA have finally released how slow Neves is off the mark as they’ve decreased his pace by -1. However, Neves was superb for large parts of last season which has seen some of his other stats such as passing and dribbling all improve by +1. 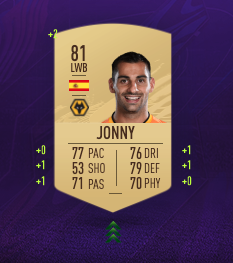 Now this is a FIFA upgrade we can really get behind. Jonny’s card has seen a +2 increase on last year and rightly so. Arguably one of the most underrated players in the league, Jonny’s contribution to Wolves since joining has been priceless. However, we do think his pace deserves more than 77! 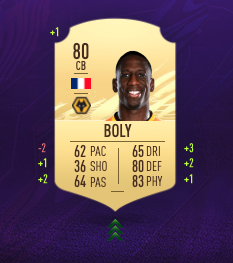 Willy Boly sees himself get a +1 upgrade in this year’s FIFA but we aren’t sure it’s too warranted. Boly spent a lot of time injured last season and has struggled to regain his previous form but we won’t complain. Boly looks set to be an ideal centre back for a Premier League Ultimate Team starter team. 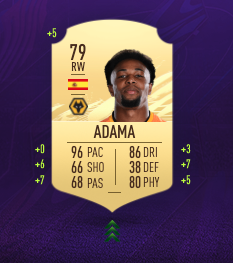 Just look at him. How gorgeous does that card look? Adama Traore’s FIFA 21 rating is up +5 on the previous year and makes him one of Wolves’ biggest upgraded players. The fine season he had last time around sees his shooting upgraded by +6, dribbling +3, defending +7 after his stint at RWB and after a bit of a moan by Adama himself, his physicality goes up +5. This card will be used so much this FIFA – it’s an absolute beast and still the quickest in the game. 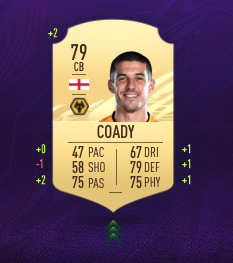 After a good season and an England call-up, Wolves captain Conor Coady’s FIFA rating increases by +2. His passing has been marginally upgraded but his pace still stays at a measly 47. 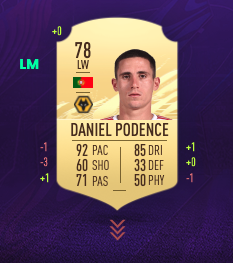 A huge season lies ahead for the impressive Daniel Podence but a lack of game time at Wolves last season means his rating stays the same. With 92 pace and 4* skill moves and weak foot, it’s still a very handy card to use. 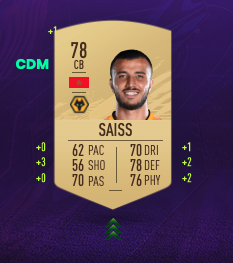 The Moroccan Prince Romain Saiss sees his FIFA rating go up by +1. Having filled in for the injured Boly, Saiss kept his place in the side and even cropped up with a few goals – hence his +3 shooting upgrade. A well-deserved upgrade all around. 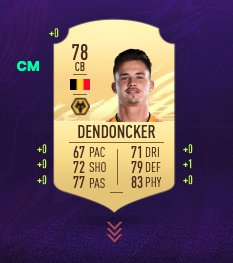 Leander Dendoncker’s FIFA rating has stayed the same this year and only his defensive attributes have seen a +1 increase, mainly due to his stint at RCB. Overall, a very steady card.

For some reason, Marçal’s FIFA 21 rating has seen a -1 decrease. Despite reaching and playing in a Champions League Semi, all of his stats have been downgraded but this may have something to do with his age. 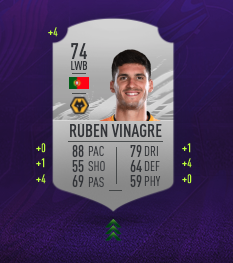 Ruben Vinagre’s FIFA 21 rating has improved by +4 which is surprising considering he rarely threatened to displace Jonny at LWB. His good dribbling skills and electric pace mean he’ll be a popular option for Ultimate Team but being a silver rare and having 4* skills, he won’t come cheap. 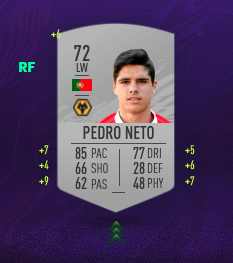 Pedro Neto gets a 6+ upgrade on this year’s FIFA and we expect a similar sort of upgrade on FIFA 22 if he continues to impress with more game time this season. It’s a massive upgrade for a player in his breakthrough season and it’s deserved. He’s a lot quicker than 85, though! 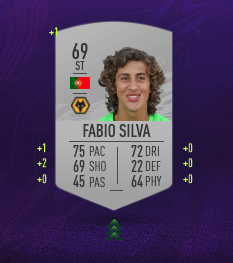 Wolves’ record signing Fabio Silva’s FIFA 21 rating has increased by +1. With limited minutes for Silva this season, it’s hard to say how the card will develop in the winter upgrades.