Wolves’ Portuguese starlets – Are they the same mould as Neves & co?

Wolves have finally made their first moves to bolster their small squad with three rapid-fire signings at the start of September. Fabio Silva was the first of those signings, a forward arriving from Porto in a deal worth £35.6 million, setting a club transfer record. Marcal, a defender from Lyon, followed the next day for £1.78m. A few days later, another young player from Porto joins named Vitinha, this time on loan.

Two out of those three transfer followed the typical Wolves mold in that they involved highly-rated Portuguese youngsters. Fabio Silva is only 18 years old and he holds the record as Porto’s youngest debutant in a league match, youngest starter and youngest scorer. 20-year old Vitinha won the UEFA Youth League in 2017-2018 with Porto’s youth team and is heralded as the next Joao Moutinho. The hopeful signings mirror the transfers of Neves, Jota, and Neto who brought loads of potential to Wolves upon their arrival, but how do these new additions compare to the talents that Neves, Jota, and Neto have proven to be?

Comparing the signings to previous purchases

Ruben Neves, the young midfielder from Porto was one of the first statements of intent that Fosun and Nuno would make at Wolves. In July 2017, the 20 year-old made the move for just £15.8 million, setting the club record at the time. His effect on the last three seasons has been immense, and he has become a key part of Wolves on the pitch. Vitinha’s transfer is similar in many ways. He is 20-years old, a midfielder from Porto, and received high praise for his potential.

However, Vitinha’s last seasons with Porto are considerably less impressive than Neves’ last seasons before he moved to Wolves. Neves played over 1,816 minutes in over 35 appearances with the Porto first team, averaging about 52 minutes per game with Porto from 2015-2017. His experience in European competitions was also impressive for a youngster with over 750 minutes across 11 games including being the youngest player to start as captain in the Champions League. With Neves, Fosun knew they were getting a quality player and at quite a steal. Vitinha’s history with the Porto first team is much shorter. He made just 8 appearances and played 110 minutes for a short 14 minutes per game in the 2019/2020 season. In that time he made no goal or assist contributions, but who can blame him based on his exposure to games. Instead, his 9 goals and 4 assists came with the Porto B team (also in 2019/2020) over 17 games and 1137 minutes. While he’s shown he can compete and be productive, he has not proven himself against competition comparable to the Premier League like Neves had. 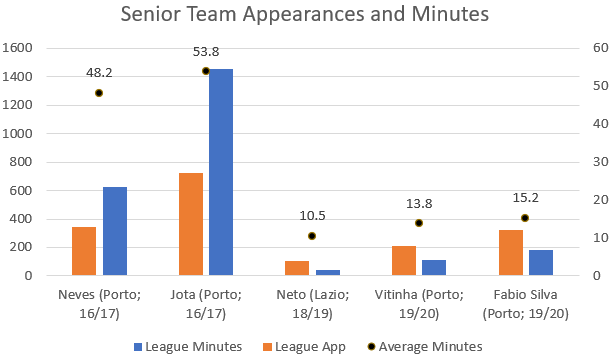 Similar comparisons can be drawn between Fabio Silva, Jota, and Neto. Jota, who moved to Wolves from Porto on a season-long loan in 2017, had two solid seasons in Liga Nos in the 2015/2016 and 2016/2017 seasons. He played over 4200 minutes, scored 21 goals, and assisted 15 times in two seasons by the time he was 20. Just like Neves, he had to a certain extent proven himself. Neto and Fabio Silva, not so much. Between the two, they scored 2 goals and assisted once. Both players played more minutes with their club’s youth teams than the senior teams. Yes, both talents were slightly younger at 17 years-old and 19 years old, but both also were purchased at higher prices. Jota’s fee of just over £12 million was dwarfed by the £35.6 million spent on Fabio Silva and was just slightly lower than the £15 million spent on Neto.

Fosun has made a clear shift in their recruitment of young Portuguese players. They’ve moved away from signing proven talents like Jota and Neves that have plenty of first-team experience and ventured into more speculative signings like Neto, Vitinha, and Fabio Silva. It’s likely that Fosun see a lot less risk in these youngsters than the seasons before. Neves and Jota had to be quality because of the tight financial conditions of the Championship where one busted transfer can set a club back. Now in the Premier League, cash is more available, and speculation is less risky on the downside. Similarly, Nuno has proven to be an incredible value creator in what he’s done with young budding talents like Neto and Traore and players have written off players like Bennett and Coady. There is definitely more trust that Nuno can extract the best from players, and the signings point to that. 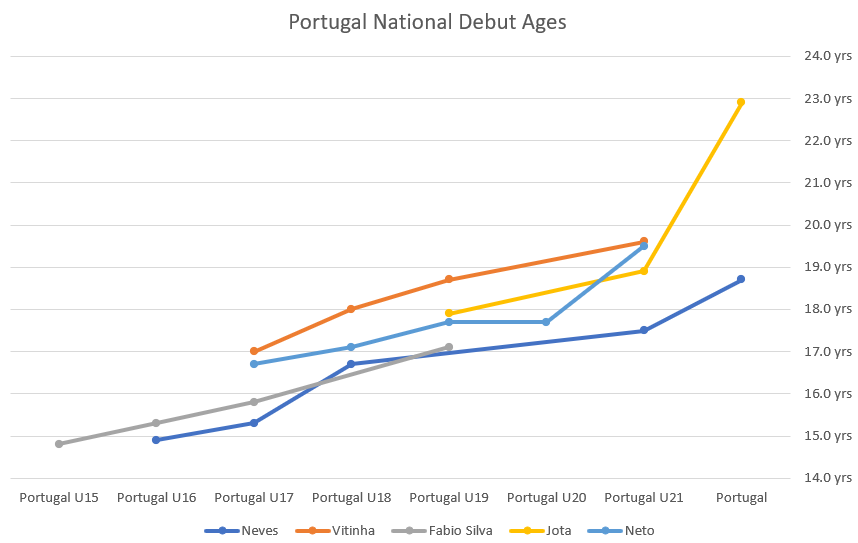 Looking at the players based on their debut ages at various Portugal levels reveals they’re actually pretty similar as far as their nation’s youth system is concerned. Fabio Silva’s and Neves’ debut ages are very similar with both players reaching the Portugal U18/U19 level by the age of 17. Neto and Vitinha, at 19.5 years and 19.6 years, are just barely off Jota’s debut age of 18.9 years for the Portugal U21s. Of course, Neves and Jota are the only two to make their Portugal senior team debuts, but if Nuno has his way, the other three won’t be far behind.

Jacob Hess is part of the Talking Wolves editorial team.