Nathan Collins: The Inside Story

Wolves have completed the signing of Nathan Collins from Burnley for £20.5 million. It’s a record transfer for an Irishman – a record previously held by Robbie Keane’s £19 million move to Liverpool.

I sat down with Tony Bowen, the man who first spotted Collins playing for Cherry Orchard in Dublin and decided to offer him a trial at Stoke City. 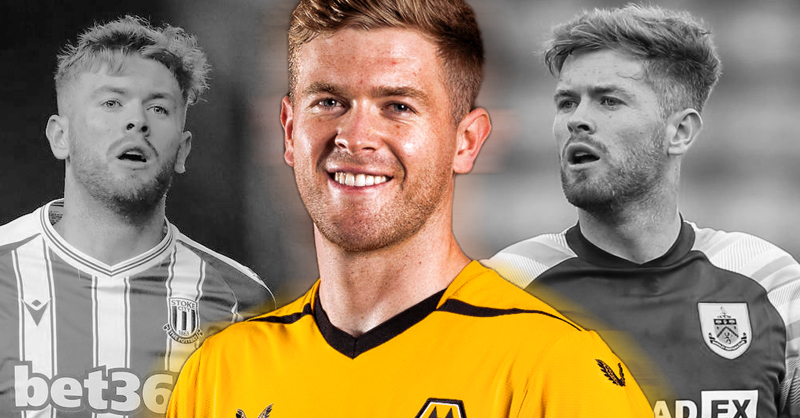 “It was back in 2015 when I was a scout at Stoke City’s Academy and as part of my role I took up scouting in Ireland. I first saw Nathan at under 14’s level and even at that age you thought, first of all, he’s a big lad for his age so maybe he’s getting away with a few things because of that but pretty quickly you could gather he could play too.”

It wasn’t just Collins’ physical attributes that stood out for Tony too. “He was a real mature lad, with a good head on his shoulders too. You could see in his play that he was an intelligent boy” said Bowen.

“Nath’s always been a leader,” Bowen suggested. He was the captain of the Republic of Ireland U16’s team that won the Victory Shield.

“There were other English clubs sniffing around him at the time and he’d already been over to play and train in an academy over here so I had conversations with Nath’s uncle ( who’s now his agent ) pretty early about potentially bringing him to Stoke City” Bowen explained.

“They’re a lovely family too. There are no airs and graces with them,” explained Tony. They’re a football family too – with Collins’ Dad previously being an apprentice at Liverpool before going on to play for Oxford.

“He’s a very unassuming chap and a big chap like Nathan. He always wanted the best for Nathan’s career and part of the reason he came to Stoke is because I built up quite a relationship with Davey.”

Nathan’s older brother also played in the League of Ireland and another family member is a scout at Manchester City.

The move to Stoke City

The first game Nathan Collins played for Stoke City was on trial, against nonother than Manchester United’s under 16’s – a year above his year group at the time.

“One of my earliest memories of that game was that he did a Cruyff turn in the middle of the field under pressure from United’s forward and pinged a 30-yard diagonal out to our wide man,” explained Tony. “ I just turned around to the scouts around me and thought ‘yep, that’ll do for me’”.

A lot of credit must be given to the coaching team at Stoke City too who’ve helped mould Collins into the player he is now.

“There are a lot of coaches who helped Nath up to the age of 17, led by a guy called Richard Walker.”

Just after Collins became a scholar at Stoke City in 2017, Richard Walker (who’s now head of the under 18’s at Stoke City) identified that he could be a real player.

“Richard said to me that this boy has got a real chance of stepping up.”

Collins was meant to have gone out on loan when he was 17 to Walsall but some safeguarding technicalities prevented him from travelling down the M6 to Walsall every day. You could say that it’s one of the best things that could have happened for the Irishman.

“Pretty quickly after that, he was in the first-team squad and Nathan Jones (the Stoke City manager at the time) was mad on him and he made him captain at 18.”

Nathan Collins rose through the ranks at Stoke, without any other loan spells and was a regular in the first-team squad at the tender age of 17.

This meteoric rise comes with a lot of pressure for a 17-year-old but it wasn’t a problem.

“He took it in his stride,” said Tony. “It doesn’t phase him at all and it was the same at Burnley. I know Burnley aren’t the same size club as Wolves are but I have no doubt he will cope with it all.”

The dream move to the Premier League

Burnley signed Collins for a reported £12.5 million back in 2021 and Tony was a little surprised to see him move to Turf Moor.

“I thought he would go to a bigger club than that,” said Tony. “At one point, there were rumours that Manchester United were sniffing around him as Darren Fletcher was the link there at one point. I thought he would have jumped to somebody like Wolves at that stage of his career.”

Burnley had two very well-established centre-backs in James Tarkowski and Ben Mee but Collins managed to displace them in his first season in the Premier League – with both of them leaving Burnley at the end of last season.

I understand that Collins did have a relegation release clause in his contract with Wolves triggering that clause with a bid worth up to £20.5 million.

“I think you’ve got a bargain,” explained Bowen.  “I’m surprised he went for that value. I feel currently he could be a £40 million player and in two or three years’ time a £70-80 million player. This is no disrespect to Wolves but I can see him at a top-four club in the next two to three years if he continues to develop.”

Collins, who’s classed as homegrown, had played a handful of games at right-back for Burnley but Tony believes his future is at centre-back.

“He’s a centre-back. He has played as a right-back for Burnley but for me, he’ll always be best suited to centre back.”

“He can do the dirty stuff but can also really play. He’s an all-round defender but he can read the game incredibly well. He’s a real intelligent boy and we’ve seen that for Burnley, too. Not only that, he can pop up with some goals too.”

“I can see him captaining Wolves in the future, further down the line if Coady was to leave. He is a born leader. He’s a top-six player and I hope he can help Wolves break into that top six.”

It’s a sensible signing from Wolves, in a position that has needed addressing for a number of years. Tony’s references for Collins are glowing and with the pure disgust from Burnley fans at the fee they’ve let him go at – it looks like Wolves may have carried out an astute bit of business.